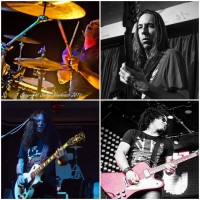 When Anthem decided to call it a day in December 2017 after nearly 12 successful years playing the East London, Essex and Hert's rock covers circuit, Paul decided to put together a brand new rock covers band of hand-picked awesome musicians. Enter Phil Toombes on Bass guitar: Phil had depped with Anthem on numerous occasions as well as playing with other respected rock covers bands, Phil was already very popular with the Anthem fans every time he played, so was a natural choice.

Pete Cowan, a highly experienced drummer who played week in week out with top rock and metal covers band “Metalworks” for many years as well as a host of other rock covers bands on the circuit was next to join. Pete had also depped with Anthem on a few occasions and Paul had always enjoyed playing alongside him, so Pete was another natural choice.

Our next mission was to find an awesome front person to lead our band. After a few rehearsals and numerous auditions, a mutual friend introduced us to Rod Rivers, a highly talented and experienced Vocalist and guitarist. Rod hails from Brazil and has had a long and successful career in his country of birth. Rod relocated to the UK in 2016 and has already gained popularity doing some guest spots in various Central London clubs and pubs since his arrival in the UK.

Rod fits the frontman role perfectly with his powerful vocals and has the added bonus of being a very accomplished guitarist too, which gives the band lots of options. Rock Candy will be covering a wide mixture of your favourite rock and metal classics from the 60’s to the present day. Our primary aim is to make each gig a memorable night with well-played songs that will make people dance or headbang in equal measures. We want everyone to go home happy after attending one big rock n roll party.